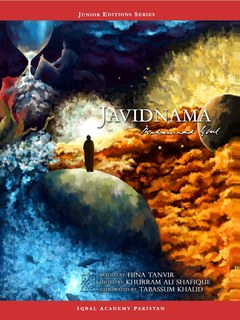 ‘When a man's eye shall be single’—Do we quite know yet what that means? Democracy is the fullest possible acceptance of the single life.

This is a quote from The New State (1918) by Mary Parker Follett. Quite interestingly, it was picked up by a contemporary Muslim poet and used in the work that is now regarded by many to be the greatest masterpiece of modern Persian literature. I am referring to Javid Nama (1932), or The Book of Eternity, by the poet-philosopher Allama Dr. Sir Muhammad Iqbal (1877-1938).

Javid Nama is an epic story about the quest for immortality. The poet journeys across the universe, guided by the spirit of Maulana Rumi, the famous Sufi master of the thirteenth century – just as Dante is guided by the spirit of Virgil in The Divine Comedy. In the climax, the poet meets the Creator. It is here that the quote from Follett appears – as part of the dialogue of “The Voice of Beauty”, i.e. the voice of God Himself! The verses have been translated by the Cambridge scholar A. J. Arberry as: “What is the nation, you who declare ‘No god but God’? With thousands of eyes, to be one in vision.”

The book has been translated into sixteen languages (at least) and there are four translations in English alone. The introduction to the German translation was written by none other than the Nobel laureate Herman Hesse. In Italian translation was done by Alessandro Bausani and the Turkish by Annemarie Schimmel.

I feel therefore humbled to say that in spite of the attention given to the book by some of the greatest academics of the twentieth century, the task of disclosing the source of these crucial lines – in a way the climax of the entire book – fell to the lot of an ordinary mortal like me. It was mentioned for the first time in my book, Iqbal: His Life and Our Times (2014). In the same book, I have summarized the affinities between the visions of Iqbal, Follett and the Bengali leader Chittaranjan Das (C. R. Das).

I feel that especially in our times, it is important for us to know about these deep-rooted connections between the visions of such influential thinkers from diverse cultures.

For this reason, I have also introduced this matter into an Urdu textbook for Grade 7, which has been recently published in the series, Kitab-i-Urdu (The Book of Urdu). Follett and her work The New State are mentioned in the lesson ‘Chittaranjan Das’, which also includes a full-page portrait of Follett painted by a Pakistani artist in full-colour.

The New State is also among the recommended books in my online courses on Iqbal Studies, which I conduct from my website www.marghdeen.com

For me, this is just the beginning. I personally believe that The New State may or may not be relevant to the people in Follett’s own country – it is up to them to decide – but for the developing countries like mine, it is practically indispensible. This is my way of saying that the vision of Follett is universal and timeless, and we need to give it a central place in our thinking if we seriously desire to find a cure to the problems that plague the world today. This is a subject on which I hope to write more in the near future.

Dear Khurram, Your entire entry is filled with fascinating stories and insights and your ending (which is just the beginning, as you say) really touched a chord.  THANK YOU and keep your ideas and information flowing.   ~  Albie Davis